Rapper Kevin Gates and his wife Dreka are having some marital issues. But if Kevin’s latest IG post is to be believed, then it all may be for the best.

Media Take Out learned that yesterday Kevin told folks on social media that he and his estranged wife Dreka are “cousins.”

It all started when Kevin’s current romantic interest, Instagram user @1never_change, posted a pic of Kevin and Dreka side by side. She wrote, “[Kevin Gates] looks like Dreka.”

Well that post set off a storm all across social media.

Some people thought that Kevin was just joking, but most suspected that Kevin and Dreka, who are both from Mississippi – may in fact be related.

Here is some of the commentary:

When Dreka and Kevin first became romantically involved, he was a part time rapper in Louisiana.

And Dreka worked to help Kevin succeed as a rapper. She read books about the music industry, and sought people out for advice advice. She also watched what other booking managers did and tried to do the same for Kevin.

However, it wasn’t easy. She confessed to The Source; “Then again, people in the industry shut you out…Yet, all the while I learned any and everything I could learn about the industry on my own because nobody is just going to say, ‘Hey come on let me show you the ropes!’ That’s just not going to happen.”

Eventually it worked, and Kevin became a huge star and married his longtime girlfriend in October 2015. The couple have two children, Islah and Khaza.

Gates also hinted that he had children by other women in a 2013 interview with Complex: “I got some children. I’m real real close with them. I lay in the bed with them, hold them, love on them. It really doesn’t make sense to say [how many kids I have]. Not in a bad way, but it’s not like the public will ever get to see my children, and if they do see them, they aren’t going to know they’re mine.”

Now they’re separating and according the Gates, he and his wife are cousins.

Something Is Really NOT RIGHT w/ Basketball Wives’ Tami Roman . . . Black Twitter Asks To ‘Pray For HER’!! (PICS)

The BET Awards Were Last Night . . . TONS Of Pics From The Red Carpet – Some HITS & MISSES! (Pics)

Raz B Claims Omarion Is No Longer A Member Of B2K… Provides RECEIPTS!! 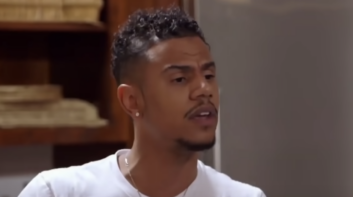